WTVA.com: "TUPELO, Miss. (WTVA) — A hot button issue has once again come up before the Tupelo City Council: public transportation.

Everyone on the council believes there's a need for public transportation in the city. The problem is how to pay for it."
at 4:12 PM No comments:

State Farm Opts for Atlanta Transit Over Sprawl | Streetsblog USA: "The insurance giant will eventually house a total of 8,000 employees at a truly massive mixed-use development connected to a MARTA rail station. Developer KDC is planning a 2.2 million square-foot project at a 17-acre site by the Dunwoody MARTA station near Perimeter Mall. The development will include 585,000 square feet of office space for the initial lease to State Farm, which plans to expand, as well as 100,000 square feet of retail and entertainment space and a 200-room hotel, according to the Atlanta Business Chronicle."
at 8:56 AM No comments:

The Troy Messenger: "With a well planned and well run public transportation system, new and old employers would thrive with a larger work force being made available by adding all those people who had no way to get to work. This would in turn generate more tax revenues that would allow the city to renovate and repair some of the older historic buildings in the downtown Troy area. It would also allow Troy to expand existing services and create new ones for its residents. A good start would be for the city to purchase two twenty-five person buses to run two separate routes in the city. One route could cover Troy University to handle students and support staff. This same bus would also be used to cover large key employers in the city and transport seasonal agricultural workers. The second bus would be used to pick up the elderly, people in need of health care, and people who need to buy groceries or shop. The use of the second bus to assist the elderly and people in need of health care is especially important as these people are the most at need in any community. This is also true in a small town like Troy with no mass transit and where many of the elderly may not have any friends or family to help them get to the doctor or to the grocery store. As a side benefit, having a city employee check in on the elderly for a regular bus pick up insures that if something has gone wrong in their home, there is someone there to check in on that person and get them help if they need it."
at 5:53 AM No comments:

“We want people to leave their cars at their hotels,” Samuels said. “We need public transport. I think (the city and beach) can work as a team to drive the economy.”

“Up until now, we’ve all planned automobiles. I think we’re starting to enter a new paradigm about how we get around. The county is building bridges with the cities. We’re all working for the same goal,” she said.

However, she added, the county’s been listing its infrastructure needs for the next 10 years.

“We’ve had to close our beaches because they were full (of cars),” she said. “People are parking in neighborhoods.”"
at 4:22 PM No comments: 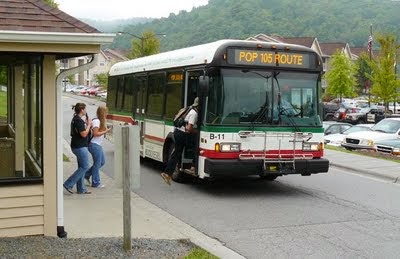 Proposal for #freetransit in Austin, Texas from 13 years ago. Still relevant.

Bus Riders Union of Austin, Texas: "Urban sprawl results from the real estate-intensiveness of a transportation system that relies on the single-occupancy personal auto for most metropolitan trips, particularly peak-hour home-to-work trips. Roughly 75% by acreage of Austin's metropolitan developed real estate is now occupied by the transportation system, by roadways and parking lots. This is the sole reason for the low densities found in newly developing areas. Absent the parking lot, the modern regional mall is a far denser concentration of retail activity than was ever found in the Central Business District, and homes in new residential subdivisions are likely to sit on smaller, not larger, lots than are found in older neighborhoods. But while a neighborhood such as Hyde Park can be served by a two-lane Duval and a two-lane Speedway, the roadway systems serving newer subdivisions comprise 5-and 7-lane arterials. Only by reducing the sheer volume of vehicular traffic can sprawl be reversed."
at 8:16 PM No comments: