CATS riders oppose proposed rate hike | WCNC.com Charlotte: "CHARLOTTE, N.C. -- Riders who use the Charlotte Area Transit system buses and trains lined up Wednesday night to voice opposition to a proposal that would raise the fare by an average of 14%.
Bus riders, community activists and members of Occupy Charlotte packed a room where the Metropolitan Transit Commission held a public hearing at the Government Center."

How to ride a bus

[Hipster] Out of Water: Get on the Bus, Part II: How to Ride: "Once you’ve boarded and paid your fare, find a seat—proper etiquette would be to take the furthest rearward seat that’s available.  This way, as the bus fills up, it is easier for others to find seats quickly, helping to speed the trip.  Also, the most forward seats are designed to accommodate wheelchairs if necessary. "

Vital Bus Line Connects Cleburne To Fort Worth « CBS Dallas / Fort Worth: CLEBURNE (CBSDFW.COM) - Rising gas prices and an aging Baby Boomer generation has spiked ridership on commuter buses between Cleburne and Fort Worth.
....
The transportation agency said that more Baby Boombers choose to take the bus to leave the driving to someone else.

Recently, KCATA announced a 5.7% rise in ridership for 2011. That amounted to 15.6 million trips, the second highest annual ridership in nearly two decades. In January and February 2012, ridership is already up 18.79% on Metro and MAX routes.
at 9:04 PM No comments:

https://www.facebook.com/pages/Transportation-Task-ForceFuerza-Laboral-de-Transportante-Memphis/255335834539788
WMC NEWS: "The Memphis Bus Riders Union held first meeting and public invitation Saturday for what members said is a stand to pressure MATA officials to improve its transit. The meeting was held at the AFSCME Union Hall in downtown Memphis. Members said they are fed up with high fares, overcrowded buses, and a lack of bus service at night in some neighborhoods, among other complaints. "It's an embarrassment to the city of Memphis," said Memphis Bus Riders Union member Lorenzo Irvin. "It's a disgrace." " 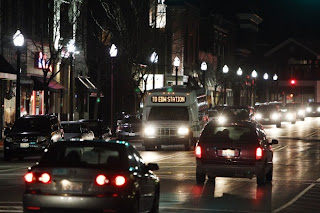 Madison County Transit shows strong ridership gains: "Metro restored most of its service cuts after St. Louis County voters approved a half-cent transit sales tax in April 2010. MCT boardings began to increase steadily that summer, Morrison said.
...
Metro ridership has also been increasing. The transit agency recorded an 8.1 percent ridership increase for the period from July 1 through Dec. 31 compared to the same months in 2010.
Nationally, public transportation ridership was 2 percent higher during the third quarter of 2011 than in the third quarter of 2010. Those figures are the most recent available."

Even Texas gets it. Get #transit or get left out.

Though plans to create the district are in the early stages — officials have no cost estimates for a proposed bus service — city officials and growth planners say the district would fill the area's need for expanded mass transit options and could be up and running as early as 2013."